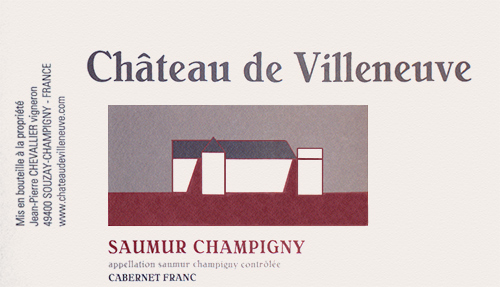 This gorgeous Saumur-Champigny comes from several parcels of 40-year-old Cabernet Franc, organically grown on gently sloping clay limestone, and was matured in a mix of wooden cuves and large barrels for twelve months. In the glass, the wine has a beautiful, saturated deep red garnet color, with flashes of bright ruby at the edge. The fresh black raspberries, sweet poblano peppers, Kalamata olives, and sandalwood that emerge when the wine is first poured, alternate with the sun warmed Damson plums, crushed blackberries, and dried violets that move in and out of the foreground as the nose evolves in the glass. On the palate, the wine is elegant, supple, and very dense, with precise black fruit flavors that echo the nose, all seasoned with vibrant tuffeau minerality, fresh mouthwatering acidity, and fine-grained silky tannins. Drink now through 2029.

About this wine producer: The Château de Villeneuve was built in 1577, and later became the property a young nobleman who was killed at the Battle of Yorktown during the American Revolutionary War. His younger brother Jean-Marie Berthelot de Villeneuve inherited the estate, and gave it its current name. In 1969, it was purchased by the Chevallier family, and since his return from teaching oenology at the University of Bordeaux in 1984, has been managed by Jean-Pierre Chevallier. Five of the surrounding 25 hectares are planted to Chenin Blanc, the rest to Cabernet Franc. Viticulture is organic, and includes severe winter pruning, bud removal in the spring, green harvests, and thoughtful canopy management, all with the aim of encouraging a deep root structure, low yields and maximum physiological ripeness. Harvests are by hand, with total de-stemming. The wines are fermented using indigenous yeasts, and are matured in a mix of new and neutral barrels. Under the Chevallier family stewardship, both the château and the vineyards have been completely renovated, a new state-of-the-art winery was built over the old cellars, and the estate is widely regarded as one of the few producers in the Loire Valley that excels at both white and red wines.