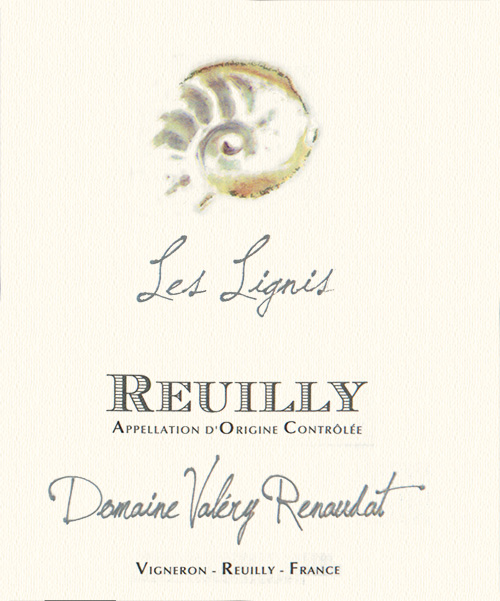 In Reuilly, as in nearby Sancerre, 2020 was the seventh in an unprecedented succession of outstanding vintages, which, along with 2018, was one of only two in the last five years that was not marked by a disastrous springtime frost. And despite the challenges of a shortage of labor, and that the vineyard and winery workers were required to “socially distance,” it was a generous harvest, which, following the particularly stingy 2019, was welcomed by the growers. The wine comes from multiple parcels of Sauvignon Blanc in the lieux-dit, Les Lignis, beyond the right bank of the Arnon, where the soils are clay-limestone over calcareous marl, full of Jurassic ammonite fossils, as in Menetou Salon and Sancerre. This limpid, pale yellow-green wine unfurls gradually with aromas of green apples and pears, fresh flowers, and white grapefruit zest – along with fleeting suggestions of walnuts, cassis, anise, and lavender, which move in and out of the foreground as the wine evolves in the glass. On the palate, the wine is sapid and concentrated – at the same time chiseled and reined in – with a delicately spicy kernel of white nectarines joining the citrus and apples, all seasoned with saline minerality that persists through the long, elegant finish. Drink now for the wine’s electrifying energy and primary fruit, or tuck away in a cool cellar for three years or more.

About this wine producer: Valéry Renaudat grew up among the farms and vineyards of Berry, including the cereal farm purchased by his grandfather in1942. His interests led him to studies in agronomy and viticulture, then to Oregon to work a harvest before going to Bordeaux, where he worked in a number of cellars, and Burgundy, where he honed his winemaking skills at Domaine Vincent Girardin. Valéry returned to his home region in 1999, and at the age of 25, established his own two-hectare domaine, buying vineyards in Reuilly, as well as becoming the only vigneron based in this appellation to reverse the trend and purchase vines in Quincy. Today he farms 18 hectares; three are planted to Pinot Noir; two hectares to Pinot Gris, with the balance in Sauvignon Blanc, and is considered a “reference” for the two appellations.