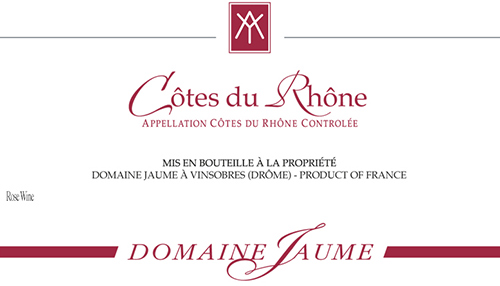 In the glass, the Côtes du Rhône Rosé Domaine Jaume has a limpid, inviting salmon color, with flashes of polished copper in candlelight at the edge. Aromas of wet stones and cranberries turn to strawberry preserves, freshly cut white peonies, red hibiscus, and tamarind that gradually emerge, and sometimes alternate, with more fleeting suggestions of wild spearmint, sweet clover, and the cinnamon-like side of fresh green perilla. The palate is juicy and supple, with multiple layers of mineral-infused flavors that echo the nose, along with discreet impressions of ripe honeydew, sumo citrus, and lime oil – all framed in vibrant berry acidity and palpable pink sea salt minerality.