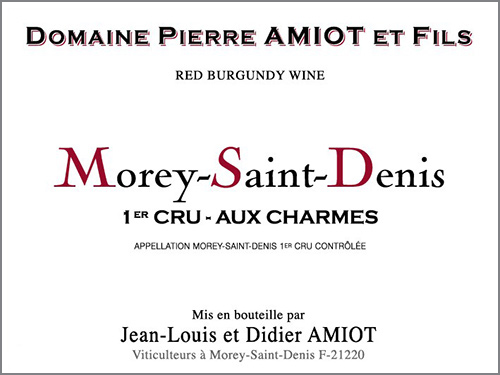 Domaine Amiot’s 0.45-hectare parcel of Aux Charmes lies just below their Clos de la Roche, and is bordered to the north by the Grand Cru Mazoyères-Chambertin. The wine has a saturated dark crimson red color, which cools to bright fuchsia just at the edge. Fresh aromas of red and black fruit, including red raspberry preserves, candied black cherries, and sun-warmed Damson plums, along with faded peonies, rose hips, and rhubarb move in and out of the foreground as the nose evolves in the glass. On the palate, the wine is vibrant, layered, and supple, with a succulent core of mineral saturated red and black fruit flavors that echo the nose, all seasoned with a fine, extended thread of spicy white tobacco, dried morel mushrooms, and freshly grated nutmeg. Easily a long-distance runner, this sensational wine remains detailed and vibrant as it grows more voluminous and compelling in the glass; the long, harmonious finish promising two more decades in a dark cool cellar. This is a perfect example of the kind of profound, aristocratic Burgundy that motivates winegrowers around the world to try their hand at Pinot Noir.

About this wine producer: Brothers Didier and Jean-Louis Amiot represent the fifth generation of their branch of the Amiot family growing wine in the Côte de Nuits. Currently, they farm forty individual parcels in Morey-Saint-Denis and Gevrey-Chambertin, some of which are more than seventy-years-old. There are eight hectares in total, including vines in five Premiers Crus and two Grands Crus.

The grapes are hand-harvested, sorted at the winery, and depending on the vintage, between 70% and 100% are destemmed. The wines ferment on the ambient yeast for ten days in thermoregulated tanks, and are matured for fifteen to eighteen months in oak barrels, of which 30% for the Premiers Crus, and 50% for the Grands Crus are new. There is only one racking, and the wines are bottled unfiltered. Their entire annual production is a minuscule 2,500 cases in most vintages.