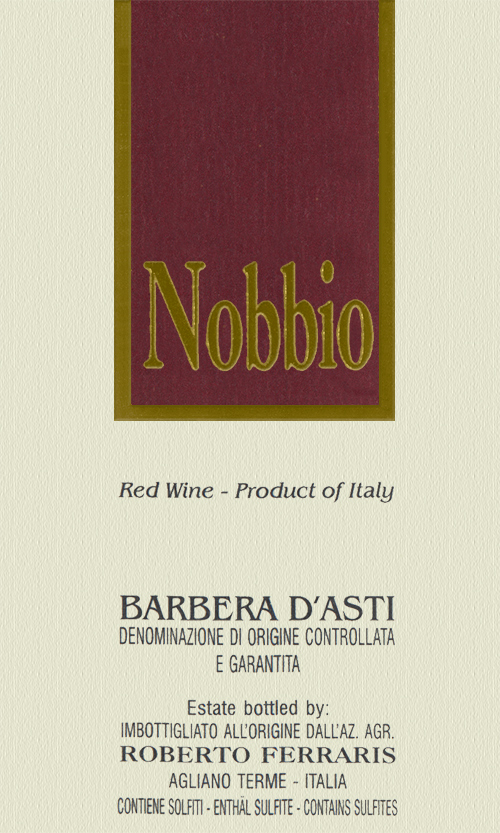 The Nobbio vineyard, a steep, south-facing amphitheater of silt and limestone, was originally planted in 1923 by Roberto’s grandfather, Stefano. Impeccably farmed ninety-five-year-old vines produce richly concentrated, yet beautifully balanced fruit, which is fermented entirely in temperature-regulated steel tanks to preserve its freshness and character.

This is a special rarity: one of few single-vineyard Barberas that are unmarked by the common, ensnaring aromas of new oak barrels. In the glass, the wine has a dark ruby color, almost black at the center, with flashes of cranberry red at the edge. Ripe black cherries, spiced tea, wild blackberry preserves, and later, unmistakable suggestions of balsam fir, crushed violets, dried autumn leaves, and sweet herbs move in and out of the foreground as the nose evolves in the glass.

On the palate, the wine is fabulously rich, multi-layered, mouthfilling, and harmonious, with a deep solid core of ripe black and red fruit flavors that echo the nose, all of which are lifted by Asti’s characteristic fresh acidity, and the vineyard’s cool limestone minerality.

About this wine producer: The Ferraris family estate was established in 1923, when Stefano Ferraris planted vines in a steep hillside vineyard in Agliano Terme. Today, the entire twelve-hectare estate produces just five thousand cases annually (almost 25% of which are sold by Moore Brothers). Like Gianni Doglia in nearby Castagnole delle Lanze, Roberto’s commitment to rigorous farming, low yields, and a sensitive approach in the cellar, has cemented his family’s reputation as one of the finest producers in Asti. Roberto’s wines are regularly awarded the prestigious “Tre Bicchieri” from Italy’s premier food and wine publication, Gambero Rosso.