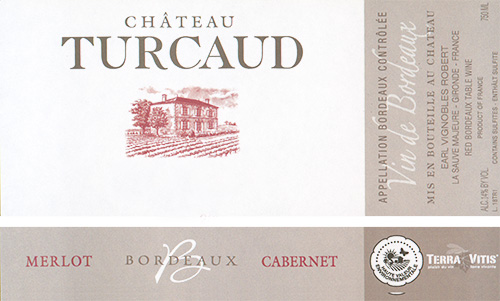 The Bordeaux Rouge of Château Turcaud comes from gravelly parcels of Merlot (70%) and Cabernet Sauvignon (30%), and represents 90% of the estate’s red wine production. After the completion of alcoholic and malolactic fermentation in stainless steel tanks, the wine matures for eighteen months before bottling (two thirds in tank, and one third in a mix of used barriques). In the glass, the wine has a glistening dark garnet color, with flashes of ruby red at the edge. The nose unfurls gradually with aromas of black cherries, red currants, eucalyptus, and fresh white tobacco, sometimes alternating with insistent suggestions of roasted tomatoes, wood smoke, and thyme as the wine evolves in the glass. On the palate, the wine is surprisingly plump and concentrated, building to a burly rich mid-palate loaded with a cornucopia of dark cherry and plummy fruit flavors that echo the nose, all lightly seasoned with cinnamon, white pepper, dried rosemary, and cedar. Chewy ripe tannins frame the aromatics, which are carried through the lingering savory finish by remarkable, refreshing red berry acidity.

About this wine producer: In 1973, Maurice Robert and his wife, Simone, purchased Château Turcaud in the Entre-Deux-Mers, an area of Bordeaux between the Garonne and Dordogne rivers. At the time, the vineyards were only 7 hectares (17 acres), but after much success, the size of the estate has increased to include 50 hectares (123 acres) of grapes.  Within ten years of purchasing the estate, Château Turcaud was on the wine lists of the most prestigious restaurants in France, including Gerard Vié’s “Les Trois Marches” in Versailles, and Jean-Claude Vrinat’s “Taillevent” in Paris.   Since 2009, Château Turcaud has been in the hands of Maurice and Simone’s daughter, Isabelle, and her husband, Stéphane Le May. They have carried on the traditions of careful vineyard management and selecting the best winemaking techniques for the production of high quality red and white wines from Château Turcaud.