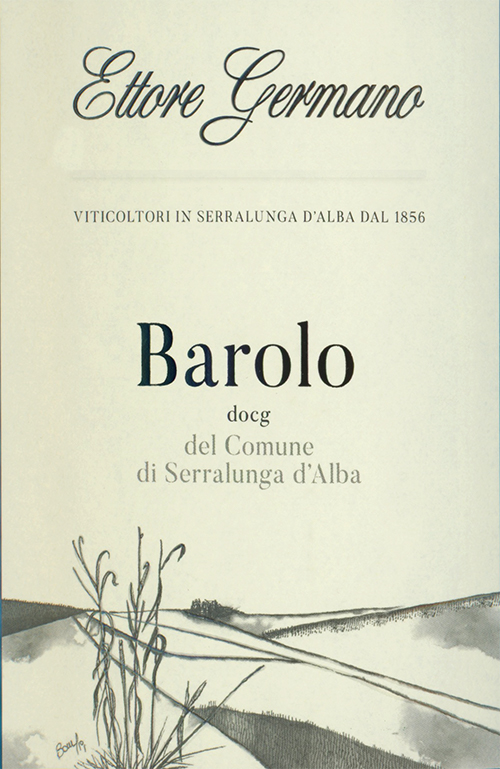 The Barolo del Comune di Serralunga d'Alba 2017 remained in contact with the skins for twenty days during and after fermentation, after which it was matured in used 700 liter barrels for two years, and in bottle for an additional fifteen months. In the glass, the limpid, ruby-red color warms from dark almandine in the center to sun-washed cedar at the edge. Aromas of morello cherries, sottobosco, dark plums, and eucalyptus move in and out of the foreground, sometimes alternating with suggestions of licorice root, orange zest, bay leaf, and juniper berries as the nose evolves over time. On the palate, the wine is muscular and taut, with laser-cut red and black fruit flavors and spices that echo the nose, all punctuated by a lingering, firmly tannic finish marked with a cooling note of fresh fennel and dried pine needles. A fascinating, powerful Barolo. Drink now–2035.

About this wine producer: Since 1856, the Germanos have farmed vineyards in Cerretta, one of Serralunga d’Alba’s most prestigious Crus. Francesco Germano, Sergio’s great grandfather, and his grandfather, Alberto, sold the grapes to friends and neighbors. His father, Ettore, for whom the estate is named, was the first to sell wine in bottles. But Sergio was the first to bottle the entire production of the estate, beginning in 1993. He is the perfect example of a modern, scientifically trained winegrower who is grounded in the traditions of his region. His goal, he says, is to express in his wines the character of each vineyard, of each grape variety, and of each vintage, as well as the “connection between Sergio Germano and Serralunga d’Alba.”