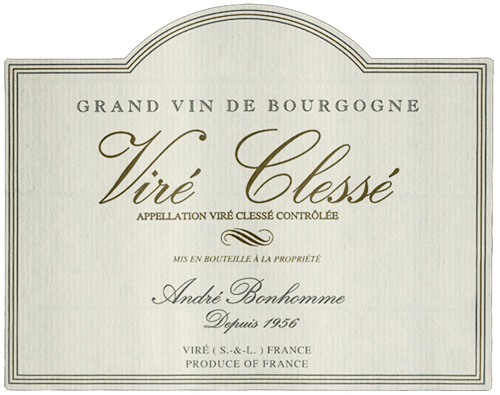 The Viré-Clessé comes from seven separate east-facing hillside vineyards, each now more than sixty years old, located above the villages of Viré and Clessé in the Maconnais. The farming is entirely organic, and the grapes are hand-harvested. After cool fermentation (20% in neutral barrels) the wine matures for a full twelve months on the lees, and is bottled six months after racking.

First, use a good large glass (this limpid, green-gold Chardonnay is Burgundy, after all, and a textbook example of how fine wine evolves after it’s poured). The nose unfolds gradually with Golden Delicious apples, ripe pears, wild fennel and raw honeycomb. On the palate, the generous, limestone-infused Chardonnay flavors echo the nose, adding cloves, ripe honeydew, and a fleeting suggestion of lilac, all seasoned with mouth watering, limestone minerality. The overall impression is one of luscious, sunny, mineral opulence.

About this wine producer: When André Bonhomme took over the family vineyards in 1956, he immediately quit selling the grapes in bulk to the local cooperative, exasperating his father, and alienating his neighbors. Setting out to bottle his own wine meant investing in winery equipment, buying bottles and corks, and finding his own customers. But being the first estate-bottler in the Maconnais had a long-term advantage: he was able to get a good, first-hand look at individual wines from unique vineyard sites, and by experiment to learn which vineyards produced the best grapes. By selling his wine in bottle rather than in bulk he was able to earn enough to quietly assemble a patchwork of the best vineyards in the region. Aurélien Palthey, André Bonhomme’s grandson, is the current director of the domaine, and he holds the reins of a cultural monument – one of the greatest estates in Burgundy.