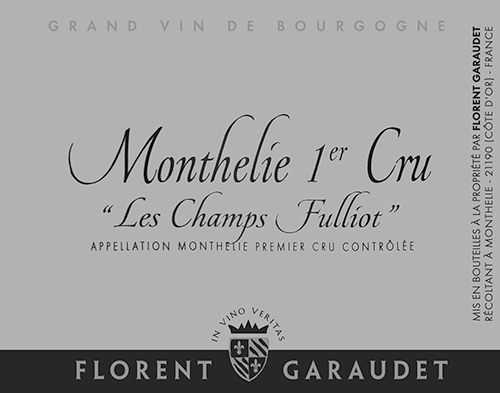 Florent’s tiny parcel in Les Champs Fulliot is a viticultural jewel, densely planted with sixty-year-old Pinot Noir, and located in the same cluster of hillside vineyards that includes the great Volnay Premiers Crus Taillepieds and Clos des Chênes. In the glass, the wine has a limpid, deep ruby red color, which cools to bright fuchsia at the edge. Fresh, insistent Pinot Noir aromas of red fruit and spices, including sundried red cranberries, griotte cherries, fresh latakia, and Piment d’Espelette move in and out of the foreground, sometimes alternating with citrus zest, pomegranate, sage, and cloves, along with fleeting suggestions of walnut oil, morel mushrooms, and cardamom, as the nose evolves over time. On the palate, the wine is elegant, sapid, and firm, with juicy mineral saturated red fruit flavors that echo the nose, all seasoned with fresh sweet herbs, sandalwood, and smoked sea salt. A long-distance runner, this sensational wine always remains taut, transparent, and vibrant as it grows more voluminous and compelling in the glass; the long, harmonious finish promising at least two more decades in a dark cool cellar. “Un style très Pommard,” according to my colleague, Pierre Paillardon. Florent himself, without undue modesty, says it reminds him of an elegant Rugiens. Drink now–2040.

About this wine producer: Like Raphaël Bérêche, Florent Garaudet is a self-confident, socially intelligent visionary, who, at the age of twenty-three was impatient to strike out on his own. So instead of coming to work alongside his father, Paul Garaudet, on the estate that has been in the family for five generations, Florent talked both of his grandmothers into giving him their vines, and beginning with the 2008 vintage, has rocketed to the head of the class in Monthelie.

At his own domaine, Florent does everything, from answering the phone to bottling the wine. “It’s not a gigantic task to take care of a three-hectare estate,” he told me. “So I can be very careful when I work.” To his advantage, the vineyards are mostly old, and densely planted at nearly 12,000 vines per hectare. All of his wines, white and red, spend time in oak barrels. But only one third on average are new, and most are 400-liter puncheons, rather than traditional 228-liter Burgundian pièces. The result is wines with elegant structure, serious concentration, and above all, compelling freshness.