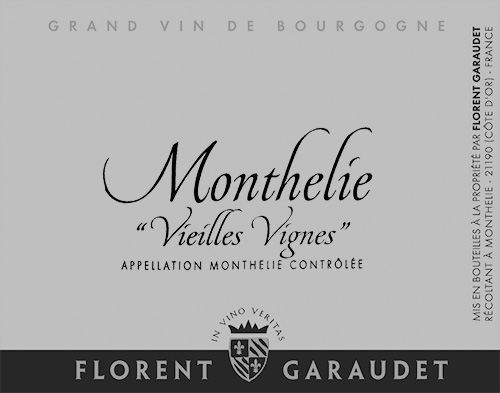 The Monthelie “Vieilles Vignes” 2017 comes from three tiny parcels of forty-five-year-old Pinot Noir located on the south facing slope just below the village, adjacent to Florent’s vines in the Premier Cru Les Champs Fulliot. In the glass, the wine has a limpid, saturated beet red color, with flashes of bright garnet at the edge. Earthy, fresh Pinot Noir aromas of red fruit and spices, including sun-warmed Bing cherries, spiced plums, pomegranate, and allspice move in and out of the foreground, sometimes alternating with freshly cut peonies, strawberry preserves, Szechuan pepper, and sage, as the nose evolves over time. On the palate, the wine is juicy and concentrated, at the same time nimble, layered, and nuanced, with a sweet core of spiced red fruit flavors that echoes the nose, and lingers through a long, refreshing, very elegant finish.

About this wine producer: Like Raphaël Bérêche, Florent Garaudet is a self-confident, socially intelligent visionary, who, at the age of twenty-three was impatient to strike out on his own. So instead of coming to work alongside his father, Paul Garaudet, on the estate that has been in the family for five generations, Florent talked both of his grandmothers into giving him their vines, and beginning with the 2008 vintage, has rocketed to the head of the class in Monthelie.

At his own domaine, Florent does everything, from answering the phone to bottling the wine. “It’s not a gigantic task to take care of a three-hectare estate,” he told me. “So I can be very careful when I work.” To his advantage, the vineyards are mostly old, and densely planted at nearly 12,000 vines per hectare. All of his wines, white and red, spend time in oak barrels. But only one third on average are new, and most are 400-liter puncheons, rather than traditional 228-liter Burgundian pièces. The result is wines with elegant structure, serious concentration, and above all, compelling freshness.