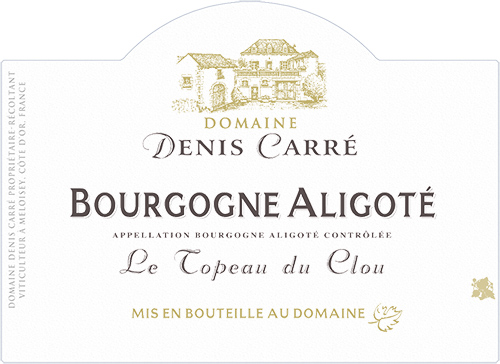 A century ago, Aligoté was often field-blended with Chardonnay, even in Grand Cru vineyards like Corton-Charlemagne and Bâtard-Montrachet. Today, this ancient white variety is mostly relegated to the low-lying, damp soils on the east side of the D974, where the vines don’t have much to say, and the wine is usually thin, acidic, and forgettable. But Le Topeau du Clou is as far from the soggy terrain east of the D974 as possible, and in the hands of a perfectionist like Martial Carré, the vines yield a wine akin to fine Chablis.

Like the Aligoté of Domaine Cornus-Camus, which you might already know, this is one of the finest Aligotés in the Haute Côtes. So make sure to pour this shimmering, pale yellow gold Burgundy into a good large glass.  White cranberries, green apple skin, ginger tea, and gooseberries  emerge on the nose, along with fresh hay, toasted hazelnuts and wintergreen, as the wine spends time in the glass. On the palate, the wine is creamy and generous, with  citrus and orchard fruit flavors that echo the nose, all infused with palpable saline minerality, and seasoned with peppered garden herbs and a final push of preserved lemon.. Just a fantastic bottle of white Burgundy. Drink now-2026.

About this wine producer: Denis Carré founded his estate in 1975 by purchasing a small collection of vineyards and building a modest winery in Meloisey, a village in the Hautes Cotes de Beaune. Over four decades, the estate has expanded to include tiny holdings in Meursault, Pommard, Auxey-Duresses, Savingy-lès-Beaune, Saint Romain and Beaune - twelve hectares in total spread out over nearly seventy (!) parcels. In 2008, Denis's children Gaetane and Martial joined estate on a full-time basis (and in doing so, doubled the number of employees of the estate from two to four). In 2013, the family completed a full renovation and expansion of their winery. Today, Martial is in charge of the farming and winemaking, while Gaetane manages the business affairs; Denis and his wife Bernadette are still active in the vines and cellar. "Technically on paper," Gaetane jokes, "my parents are retired. But they are the best employees we have: they're always available and they work for free!"