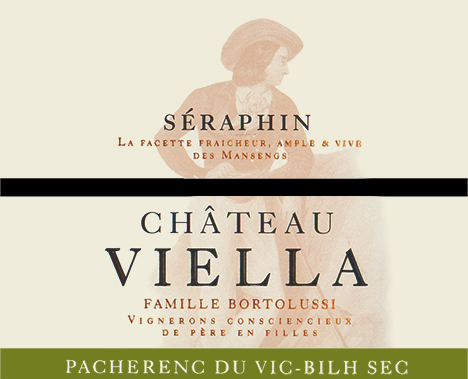 Over the last twenty years, Château Viella has replanted small parcels of the indigenous white grapes of the area; Arrufiac, Petit Corbeu, Petit Manseng, and Gros Manseng to produce this dry, vibrant wine which carries the appellation, Pacherenc du Vic-Bilh. The limestone-rich, clay soils of the area provide perfect drainage and minerality to the wines. Very rigorous, natural farming produces terrifically concentrated wines, of which, this is a perfect example. Rich aromatics of quince and lime are matched with a beautiful textural richness from the (neutral) barrel fermentation and aging.

About this wine producer: In 1952, Alain Bortolussi's grandfather, an immigrant from the Veneto, purchased the eighteenth-century château and the surrounding 25 hectares of vines, which had just been classified under AOC regulations as Madiran and Pacherenc du Vic Bilh. At the time, it had almost no value. Over the next thirty-five years, most of the estate was replanted with the best clones of Tannat and Cabernet Franc for the Madiran, along with a tiny one-hectare parcel of local white varieties for the Pacherenc du Vic-Bilh. Alain, who is the first to bottle wine at the estate, took charge in 1991. When I met him in 2013, he was just completing the restoration of the château. In 2016, his daughters, Claire, and Marion, joined Alain at Château Viella, and in 2019, on Alain’s nominal “retirement,” have taken the reins of this jewel of a winegrowing estate.