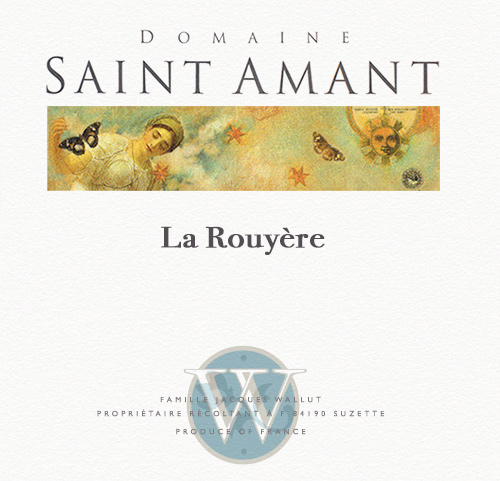 The Côtes du Rhône La Rouyère is comprised of equal parts of Syrah and Grenache, grown on a two-hectare, windswept parcel of limestone just above the village of Suzette. The grapes were harvested at only 25 hl/ha (a miniscule yield typical of much more expensive wine), and were fermented and aged in a mix of stainless steel tanks and 15-year-old temperature-controlled oak vats. In the glass, the wine has a limpid, saturated, red-garnet color, with flashes of crimson at the edge. Aromas of fresh cranberries, ripe Lambert cherries, faded violets, and pomegranate move in and out of the foreground, sometimes changing places with fleeting suggestions of crushed blackberries, wild mint, and almond blossoms as the nose evolves in the glass. On the palate the wine is captivating and elegant, deep and substantial, but transparent, with a core of sweet red fruit and baking spices, delicately seasoned with freshly ground black pepper and thyme, and underpinned by cool graphite minerality (like a northern Rhône Syrah). It’s hard to believe that this sublimely elegant wine comes from so far south. Drink now–2025.

About this wine producer: Camille Wallut is an architect by training, and a second-generation vigneronne, who returned to take the reins of one of the most extraordinary estates in the southern Côtes-du-Rhône when her father retired in 1997. Her 13 hectares of vines are planted at an average altitude of 500 meters, in the shale and limestone foothills of the Dentelles de Montmirail above the village of Suzette. Some of the Grenache was planted more than eighty years ago. Included is a parcel lying on a Mistral-swept terrace at 620 meters, which is the highest vineyard in all the Côtes-du-Rhône. Because of the altitude, the temperature is much cooler at night than in the valley, so the grapes retain acidity, ripen more evenly, and form more complex aromas. A second benefit is that organic viticulture is much easier than down in the valley, because common valley vine diseases like mildew and grey rot, which often require aggressive chemical treatment, are rarely found at such high altitudes.