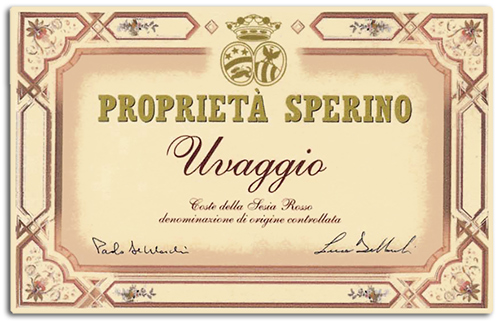 The Uvaggio has a saturated cranberry red color, cooling to deep limpid garnet just at the edge. The nose of sweet morello cherries, Bresaola, dried rose petals and Pennyroyal mint is seasoned with discrete baking spices and a faint suggestion of vanilla, which comes in part from the mix of new and used barrels.

On the palate, the wine is rounder and more succulent than earlier vintages: medium bodied and polished, with deep, black-and-red fruit flavors seasoned with anise, cloves, and palpable, almost saline minerality–all framed by ripe, elegant, fine-grained tannins. “Volnay dressed in Armani,” according to our colleague, John Murphy.

About this wine producer: According to Il Corriere Vinicolo, Italy’s “wine Wall Street Journal,” the “Spanna” (Nebbiolo) grown a hundred years ago by Paolo De Marchi’s great, great uncle was the most expensive wine in Italy. Today, after ten years spent replanting the vineyards and renovating the winery, Paolo and Luca have given new life to Proprietà Sperino, and stimulated a renaissance of viticulture in this historic wine-growing area. The eight hectares of vines at Proprietà Sperino are mostly in the district of Ori, so-called for the deep yellow marine sand that lies on the sun-drenched, sub-alpine plateau of Orolungo. If you scoop up the soil only a half-hour after a rainstorm, it slips through your fingers like sand in an hourglass.