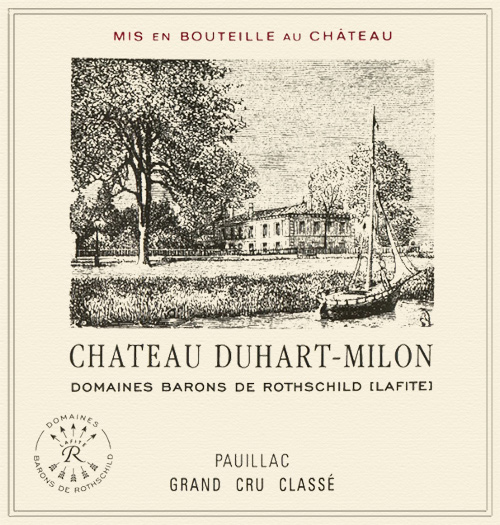 In the glass, the wine has a super-saturated dark garnet color, almost opaque at the center, with flashes of ruby red at the edge. Gorgeous, irresistible aromas of brandied black cherries, dark cocoa, crème de cassis, and fresh white tobacco move in and out of the foreground, alternating with ripe pomegranate, black licorice, and fading chrysanthemums as the nose evolves in the glass.

On the palate, the wine is multi-layered and opulent, with a sweet core of black fruit and spices that dissolves with perfect symmetry into echoes of its evolving nose, with just enough grip to keep you focused. Stunning. Like a Beethoven Piano Sonata. Or like reading The Portrait of a Lady, when, unexpectedly, you find yourself 40 pages in, thoroughly enthralled with every facet of Isabelle Archer.

About this wine producer: Château Duhart-Milon is owned by its famous neighbor Château Lafite Rothschild, with which it shares a vineyard management and winemaking team. Originally the property of a gunrunning pirate who served the interest King Louis XV, the vineyard was classified a Fourth Grand Cru in the Bordeaux classification of 1855. Today, with the resources of Château Lafite Rothschild having financed a complete renovation of the winery, as well as a wholesale replanting of the vineyards (many of which had been destroyed in the frost of 1956), Duhart- Milon is now in the front rank of the top superstar producers in Pauillac. There are 73 hectares planted mostly to Cabernet Sauvignon, with about 33% Merlot, and a bit of Petit Verdot. The wines are aged for 18 months in barrels made at Château Lafite Rothschild’s own cooperage, 50% of which are new.