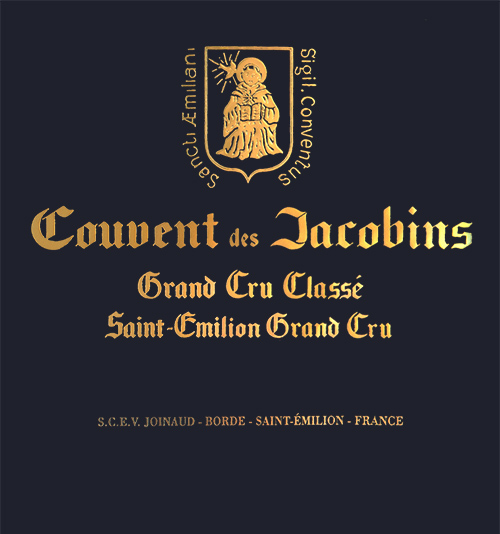 The Couvent des Jacobins 2005 is comprised of 75% Merlot, and 25% Cabernet Franc. In the glass, the wine is nearly black at the center, with flashes of garnet just at the edge.

When the wine is first poured, inviting aromas suggesting ripe sun-warmed blackberries, Mission figs, brandied griotte cherries, and melted dark chocolate move in and out of the foreground, alternating with an amalgam of black licorice, chanterelles and roasted espresso.

On the palate, the wine is full-bodied and deeply satisfying, with a succulent layered core of black fruit and exotic spices that dissolves into echoes of the evolving nose, and is infused with layers of supple, velvety sweet tannins that seem to seem to meld together in an endless harmonious finish. Drink now through its anticipated maturity of 2024 - 2030. About this wine producer: This ancient estate traces its history to 1389, with a land grant to the Dominican friars, who were known as the “Jacobin Brothers.” For four centuries, the Dominicans produced wine that was exported to the royal courts of both England and France. At the time of the French Revolution, Couvent des Jacobins was confiscated and sold off as a national estate. In 1902, the estate was purchased by Jean Jean, great-great-grandfather of Xavier Jean, who is assisted by winemaker Denis Pomaréde.

The 10.7-hectare vineyard lies just outside of the wall around the town of Saint-Emilion, and the cellar is one of only a few that are within the town itself. In 2005, the grapes were hand-harvested and vinified plot by plot in traditional concrete fermenting tanks, and the wine matured for twelve months in a mix of barriques, of which 40% were new. More recent vintages include a small component of more recently planted Petit Verdot, and a slightly higher proportion of new barrels in the mix.

Couvent des Jacobins has consistently retained its status as a Grand Cru Classé.