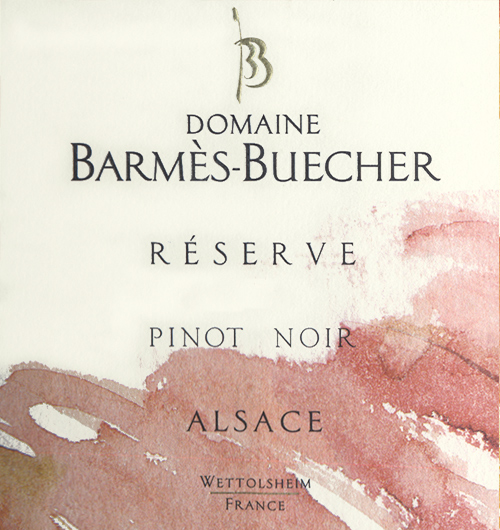 The Pinot Noir Réserve comes from multiple plots of varying age, mostly east-facing parcels in the Rosenberg, where the clay-limestone and marly sandstone give this Pinot Noir its length and elegance. Most of the vines were planted more than twenty years ago by François Barmès, in sélection massale from vineyards in Burgundy.

In a good glass, this soft-edged, ruby red Pinot Noir is a perfect example of a wine that puts on weight over time. Sun-warmed red cherries, freshly crushed cranberries, and discreet orange citrus move in and out of the foreground, with fleeting hints of pomegranate, eucalyptus, and cardamom as the nose evolves in the glass.

On the palate, the wine is supple and medium bodied, with a silky core of sweet Pinot Noir fruit seasoned with saline limestone minerality, framed by a lingering, soft, fine-grained finish. And like every other high quality, terroir-expressive Pinot Noir, if you give it a few minutes in the glass, the sous bois and fresh hay that perfume the warm summer breezes in the hills above Wettolsheim will remind you exactly where the wine was grown.