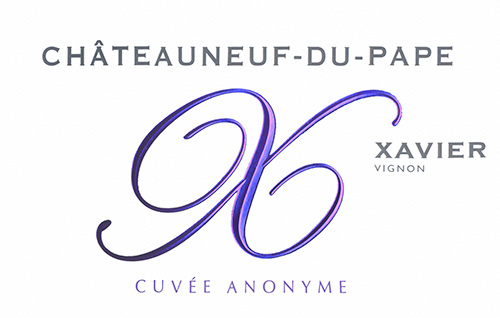 Xavier Vignon carefully selects his Cuvée Anonyme from among the most promising barrels at his top client estates, each of which (thanks in part to Xavier’s heedful supervision) produced its own benchmark Châteauneuf-du-Pape in 2016. The star-studded list includes Raymond Usseglio, Château La Nerthe, Domaine La Mordorée, and Domaine de Beaurenard, among others. Which means that this unique cuvée takes selection to the highest possible level: the cream of the cream of the cream.

Seven of the thirteen permitted varieties are in the blend, which is mostly comprised of 65% Grenache Noir and 25% Mourvèdre, with the balance made up of Vaccarèse, Counoise, Cinsault, Terret Noir and Muscardin. All four important terroirs are represented: la Crau, les galets roulés, les sables, and les Urgoniens.

In the glass, the Châteauneuf-du-Pape Cuvée Anonyme has a has a dark garnet color, almost black at the center, yet limpid in natural light, as if it were illuminated from within. Ripe griotte cherries, melted baker’s chocolate, black licorice, and a basket of dried flowers and spices all move in and out of the foreground, giving way to mulberry jam, black truffles, cardamom, and herbes de Provence as the nose develops in the glass.

On the palate, the wine is thick, opulent, and velvety, with sweet graphite-infused black fruit flavors that echo the nose: black cherries, cassis, dates, and dried figs. The palpable mineral extract, voluptuous ripe tannins, and the low-pH Mourvèdre all contribute to the wine’s compelling length of flavors, and the wine gains weight over time in the glass. This is a towering achievement, with fine, laser linear tannins that should carry the wine effortlessly through the next decade. Drink now – 2030. About this wine producer: As the technical director and head enologist at “Laboratoire Avignon Oenologie Conseil,” Xavier Vignon is the consulting winemaker at more than 300 estates, including most of the best-known domaines in Châteauneuf-du-Pape. In lieu of payment for his laboratory’s service, he sometimes accepts wine, which the micro-négociant company he established in 2002, “Xavier Vins,” uses to produce exceptional wines of the southern Rhône Valley. Originally a physical chemist, Xavier is particularly interested in how the spectrum of dissolved mineral salts in the groundwater of each vineyard, which varies from parcel to parcel, influences the expression of terroir in the grapes. “I’m a trained enologist,” he says. “I’ve examined wine down to the molecular level. Which, in the end, convinces me that what is most important are the vines, the depth of the roots, and the health and balance of the vineyard.”